The Redwood Coast Energy Authority leads and collaborates on many projects that require third-party service providers to participate in a process of public bidding or to provide project expertise or assistance. Trainings, workshops, rebates, and promotional materials help contractors sell projects. We completed over 45 contractor-led energy efficiency and renewable energy projects in 2019-20. New opportunities to work with RCEA will soon be available.

Current and recent solicitations are listed below. The full Requests and any supporting documents can be viewed and/or downloaded below as a Portable Document Format (PDF), which includes instructions on how to submit a response and any associated deadline.

Contractors and Vendors – get signed up and open doors to new opportunities.

Visit our RCEA Contractor and Vendor Network page for details.

Get your business Certified through the CPUC Supplier Clearinghouse– Go to our Supplier Diversity page to learn more.

If you’ve ever wanted some extra guidance on how to navigate government contracting–including bidding on opportunities from RCEA–there’s help for you. The Northern California Procurement Technical Assistance Center (Norcal PTAC) is a government-funded nonprofit formed to help small businesses find, bid, win, and perform on contracts with federal, state, local, and tribal agencies. Norcal PTAC offers free client services including one-on-one counseling, custom bid matching and networking opportunities. They are headquartered on the Cal Poly Humboldt campus and serve Humboldt County as well as 14 surrounding counties in Northern California. Sign up at norcalptac.org.

Below are requests for qualifications, proposals, and information from appropriate parties in the community by various departments at RCEA

New community-scale renewable energy generation projects in RCEA’s service territory that are up to 1 megawatt in capacity. 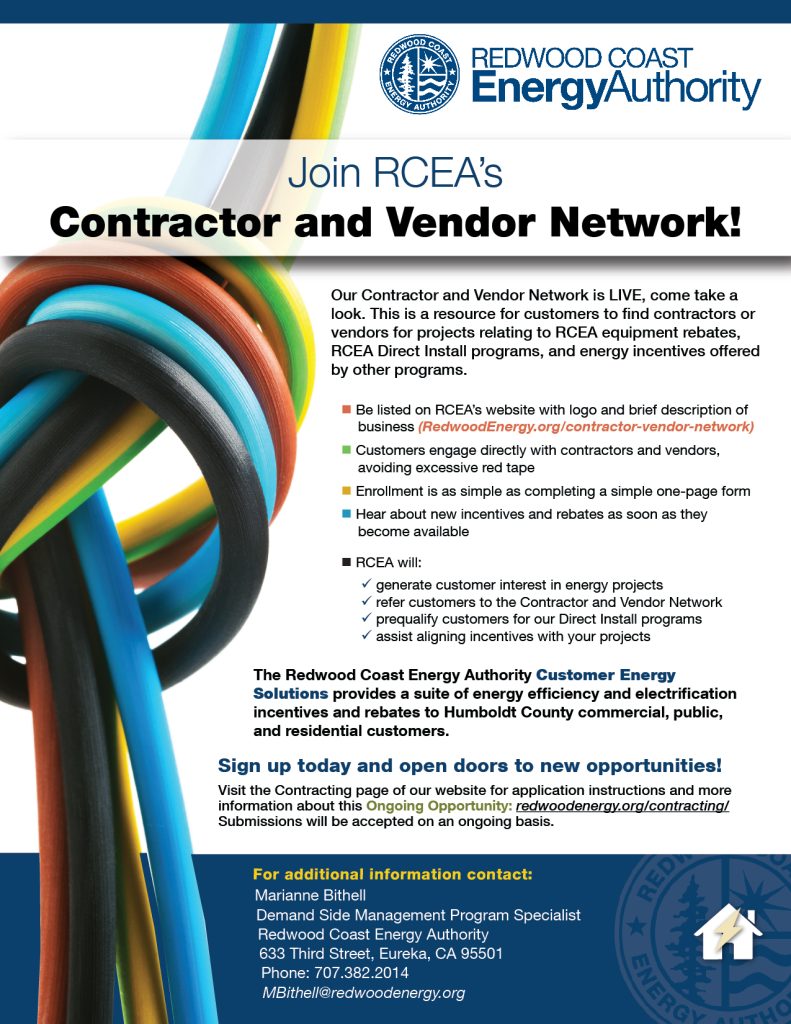 RFQ/RFP for Solar and Heat Pump

Redwood Coast Energy Authority (RCEA) is soliciting bids from interested contractors for the Arcata Community Center Electric Vehicle Charging Stations Installation (Project). The goal of the project is to install either two (base bid) or four (base plus additive bid) electric vehicle charging stations at the Arcata Community Center. The price shall be full compensation for all preparation, erection, and installation of the materials provided by RCEA, and for all labor, equipment, tools, and incidentals necessary to complete the project. Estimated project value is $25,000.00. RCEA has already received approval for all required permits and will provide the new charging station hardware to be installed. All work must be completed by July 13, 2021.

For complete details please see the INVITATION FOR BIDS.

RCEA is seeking offers for new or incremental, zero-emission resources that can deliver resource adequacy (RA) to further its contributions to the reliability of the California power grid, and to fulfill its procurement obligations pursuant to the CPUC’s Mid-Term Reliability Decision. Specifically, offers of zero-emission generation or generation plus storage that meet the MTR Decision criteria for replacement of the Diablo Canyon Nuclear Power Plant are eligible for consideration under this RFO.

Through this combined RFQ-RFO, RCEA is seeking proposals that can either 1) satisfy RCEA’s compliance obligation for incremental capacity procurement pursuant to the CPUC Decision 21-06-035 Requiring Procurement to Address Mid-Term Reliability for 2023-2026, or 2) identify project partners to lead the development of long-term reliability resources within RCEA’s service area.

October 15, 2021 – Final solicitation questions are due

February to April 2022 – Negotiation and approval of contracts

RCEA and seven other CCAs are seeking to acquire up to 500 MWs of capacity, energy, any associated ancillary products, and resource adequacy (“Full Toll”) or simply Resource Adequacy (“RA Only”) from long-duration energy storage projects. Responses are due December 1, 2020 at 5:00 PST.

Download the Request for Offers Protocol and Appendix A Offer Form from the Silicon Valley Clean Energy Long Duration Storage RFO website to submit an offer.

Here is a fact sheet if you would like more information.

The Redwood Coast Energy Authority (RCEA) launched its Community Choice Energy program for Humboldt County, California in May of 2017 with the following core goal:

Maximize the use of local renewable energy while providing competitive rates to customers.

The Community Choice Energy program has now been serving some 60,000 customers for over two and a half years, with approximately 700,000 MWh of annual load and over $2 million in bill savings relative to the investor-owned utility generation rates customers would otherwise pay.

Additionally, the electricity revenue from this program is redirected into community-driven energy choices, including procuring local biomass electricity, development of an offshore wind energy industry in California with Humboldt Bay as a leading hub, and RCEA’s first solar-with-storage generation asset, planned for the California Redwood Coast – Humboldt County Airport.

To further maximize the use of our local renewable energy resources, RCEA has launched a Request for Proposals (RFP) with the goal of entering into long-term Power Purchase Agreement(s) (PPA) with one or more renewable energy facilities located in or to be located in Humboldt and surrounding northern California counties, including Del Norte, Siskiyou, Modoc, Trinity, Shasta, Tehama, Glenn, Mendocino, Lake and Sonoma.

In addition to this solicitation, RCEA will be issuing a Feed-In Tariff this May for new projects one MW and under to be built in our service area. Please consider this alternative opportunity to provide power to RCEA’s portfolio.

We received proposals from thirteen companies and, after a careful review process by a team of RCEA staff and outside energy experts, have identified three companies that will be presented to the Board for consideration at its June meeting.

The PPAs currently being considered are:

RCEA is currently conducting a Request for Proposals for Behind-the-Meter Distributed Resource Adequacy (DER RFP) that is open to vendors who previously qualified under RCEA’s Request for Qualifications. To be eligible for the DER RFP, vendors had to respond to the open RFQ by March 13, 2020 and be approved by a review team of RCEA staff.

The DER RFP aims to develop 5 megawatts of energy storage and distributed resource capacity behind customer meters at preferred sites in Humboldt County, including public agencies and schools, low-income homes and businesses, and other sites within high fire threat areas. The main objectives of the program are 1) resource adequacy value, 2) critical energy resiliency during grid outages, 3) customer utility cost savings, and 4) grid decarbonization.

Materials related to the DER RFP will be emailed directly to RCEA’s approved vendor list.

(Closed) The Redwood Coast Energy Authority (RCEA) is soliciting proposals for financial audit services and will receive them until 5pm PST on April 24, 2019. The general scope of services includes audit of RCEA’s annual financial statements. A complete scope of the services to be performed by the successful proposer are described in the attached Request for Proposal for Professional Auditing Services.

Any questions regarding this RFP should be directed to Lori Biondini, Director of Business Planning and Finance, RCEA, 633 Third Street, Eureka, CA, 95501; 707-269-1700 x316; lbiondini@redwoodenergy.org.

RFP for Consulting Services on Hydropower, Bioenergy, and CAP

RFP for Consulting Services on Hydropower, Bioenergy, and CAP (PDF)

Sign up for our Listserv to get the latest news and announcements.

This website uses cookies to improve your experience while you navigate through the website. Out of these cookies, the cookies that are categorized as necessary are stored on your browser as they are essential for the working of basic functionalities of the website. We also use third-party cookies that help us analyze and understand how you use this website. These cookies will be stored in your browser only with your consent. You also have the option to opt-out of these cookies. But opting out of some of these cookies may have an effect on your browsing experience.
Necessary Always Enabled
When you visit the website, our server may create cookies, which are small files placed on your computer, making it easier for you to use the website by verifying when you travel from page to page. The data we collect on website usage from cookies is not tied to your personal information and we only use it in a collective form. We do not sell or transfer the data we obtain from cookies for any purpose other than to evaluate website usage or provide utility services to you, or to contact you to offer programs and/or services that you may be interested in. We only use cookies that are necessary.
SAVE & ACCEPT
Menu