Humboldt County has been featured in local, national and international news since 2018 as a potentially ideal location for offshore wind energy generation. The Redwood Coast Energy Authority, tasked with developing local renewable resources and energy-related economic advancement, has taken lead on coordinating the extensive planning and research process required for what could be California’s first floating offshore wind project. While conversations with local fishermen, tribes, environmentalists, labor unions and government partners are ongoing, our community’s response has been supportive. RCEA is committed to advancing the responsible development of our offshore wind resource in a manner that maximizes benefits to the local community.

Selected based on extensive stakeholder input and technical factors:

“The farther out the better” 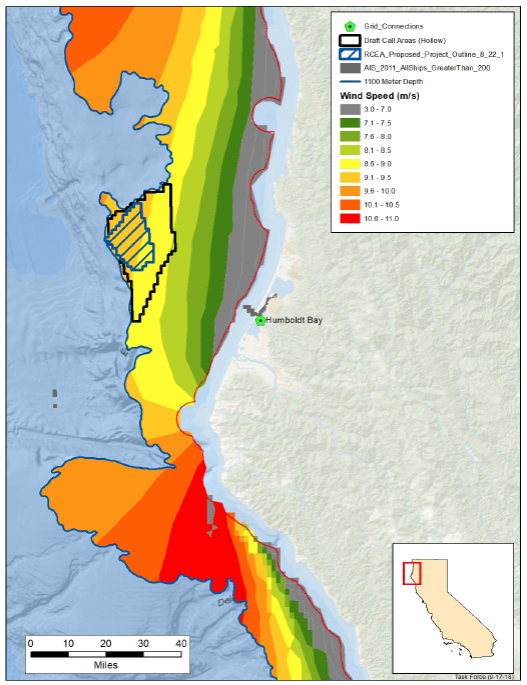 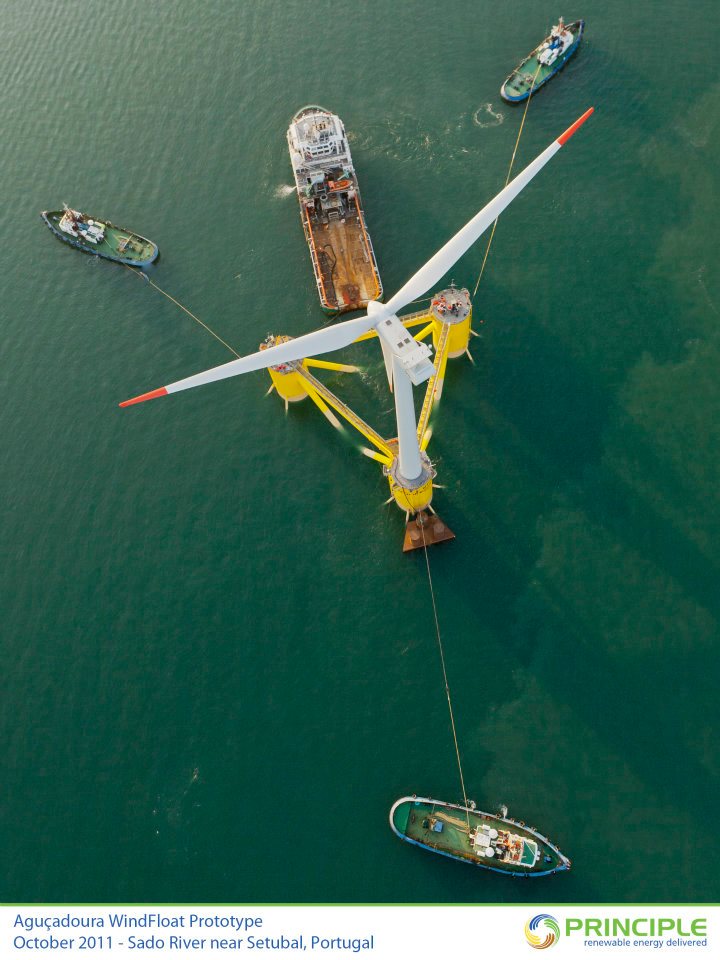 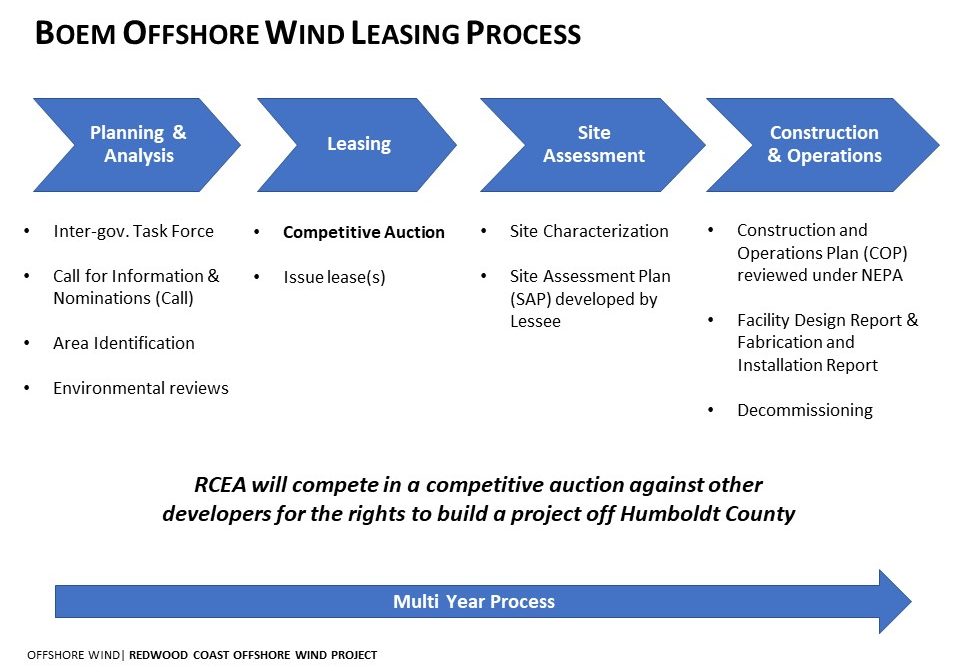 Offshore Wind Energy is an important addition to our nation’s energy portfolio. Learn more about Offshore Wind’s history and how it works. You’ll also learn about the steps BOEM takes to work with many stakeholders when planning offshore wind development.

What is the Call for Information?

Many of our community stakeholders submitted comments to:

In response to the Call, BOEM announced on April 23, 2019 that they received 14 nominations from developers who identified specific portions of the call areas for which they wish to obtain a commercial lease for a wind energy project.

A summary of the nominations can be found HERE.

What About the Fishing Community?

The North Coast region is home to a commercial fishing industry that provides sustainably-caught seafood to our community and many others.  For many generations these commercial fisheries have provided a livelihood for local fishermen and their families, and it continues to be a key element of our region’s economy and local culture.

The Redwood Offshore Wind consortium recognizes that a viable commercial fishing industry is integral to the economy and culture of the North Coast and that the development of offshore wind energy will permanently impact the commercial fishing industry economically and culturally. They recognize that such development should be pursued in a manner that minimizes and mitigates impacts to fishing so that both endeavors can sustainably coexist for the benefit of our community. Both the consortium and the Humboldt Fishermen’s Marketing Association  agree to cooperate and work together in good faith for the purpose of ensuring that the efforts of RCEA and its project partners to develop a floating offshore wind energy project off the coast of Humboldt County proceed in a way that effectively identifies, avoids, minimizes, and mitigates impacts to the commercial fishing industry to the greatest extent possible. 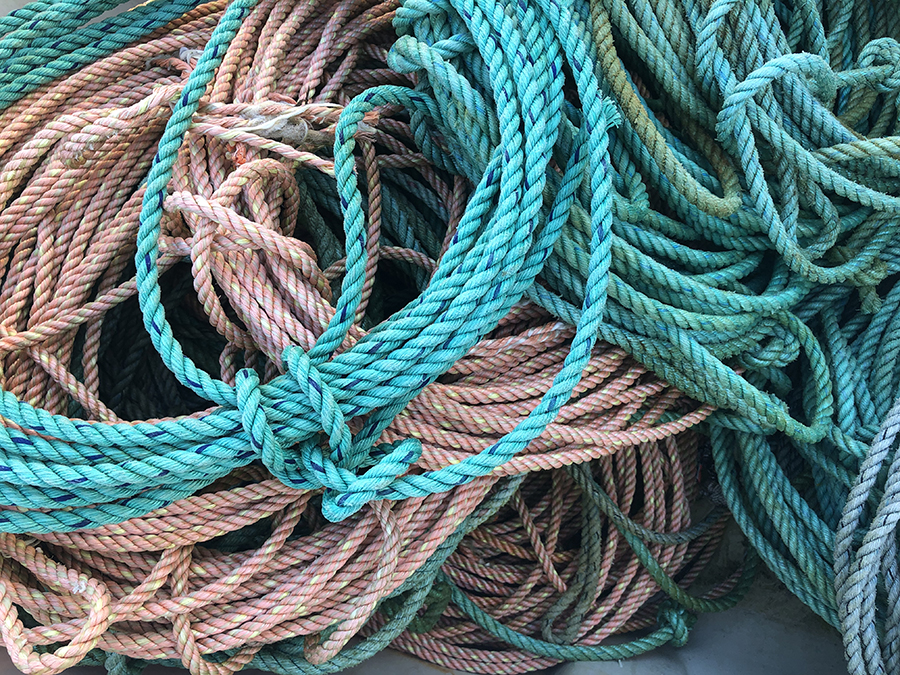 What is the Redwood Coast Offshore Wind consortium?

At the beginning of April, 2018 the RCEA Board of Directors selected partners for a public-private partnership to explore developing a wind farm off the coast of Humboldt County. The consortium, consisting of Principle Power Inc., EDPR Offshore North America LLC, Aker Solutions Inc., H. T. Harvey & Associates, and Herrera Environmental Consultants Inc, was selected from six highly qualified respondents after RCEA issued a Request for Qualifications in February.

RCEA and the consortium submitted an unsolicited lease application to the Bureau of Ocean Energy Management on September 12, 2018. Although that lease request was not granted, we are continuing with what will now be a competitive lease auction for the same area. The consortium is working closely with local stakeholders to minimize any potential impacts and maximize local community benefits. Once a lease has been approved, the work of researching and developing a plan will take years to complete and will be the product of extensive community collaboration.

Does RCEA’s long-term contract for 100 MW of solar energy from the Sandrini Sol 1 project preclude RCEA contracting for offshore wind when that becomes available?

RCEA’s goal is to have a diversified power mix, and this long-term solar power purchase agreement is an ideal complement to offshore wind in a number of ways. The solar contract’s price per unit of energy is lower than we expect offshore wind to cost, but offshore wind’s time-of-day production better matches our customer load shape. In addition, the location of the solar project allows it to avoid the transmission access challenge that large-scale renewable energy generation sited in Humboldt County faces, due to our remoteness from the state’s main transmission corridors.

The Sandrini contract helps us meet our near-term SB350 compliance targets, which require us to secure long-term renewable portfolio standard contracts, and it does so in a very cost-effective way. We could not have waited for offshore wind for this purpose, given the long development timeline. About half of RCEA’s portfolio remains open for long-term contracts.

It will also be critical for there to be more than one off-taker for a large-scale offshore wind industry to be successful. Hopefully, other Community Choice Energy programs across the state can add offshore wind to their portfolios as well.

Click on the partner logos below to be directed to their respective websites.

Windpower Engineering and Development  –  Offshore wind is (finally) coming to America. RCEA is #4 out of the 8 most significant steps forward for offshore wind in 2018

NY Times – “Something New May Be Rising Off California Coast: Wind Farms”.

Interview: Astrid Skarheim Onsum, SVP, Head of Wind, Aker Solutions. Her view on the path ahead and the growing role and promising future of ‘floating wind.’

Senator McGuire hosted a Joint Committee on Fisheries and Aquaculture an offshore wind energy hearing on May 3, 2019 at the Humboldt Bay Aquatic Center in Eureka.

California’s Fisheries and Wildlife – Can they co-exist with Offshore Wind Energy Development?

From the National Renewable Energy Lab

The California Offshore Wind Project: A Vision for Industry Growth. The American Jobs Project
Through extensive research and over forty interviews with stakeholders and experts in California, the authors assessed the current challenges and opportunities for offshore wind development.
About California

Potential Offshore Wind Energy Areas in California: An Assessment of Locations, Technology, and Costs
By the National Renewable Energy Laboratory

Department of the Navy California Offshore Wind Compatibility Assessment
In anticipation of growing interest in developing wind energy projects offshore California, the Department of the Navy has conducted a mission compatibility assessment for the outer continental shelf.  The compatibility assessment reflects the requirements of Navy and Marine Corps missions conducted in the air, on the surface, and below the surface of these waters.

The Humboldt County General Plan designates RCEA as the regional energy authority with the responsibility to coordinate and facilitate countywide strategic energy planning and implementation. In 2012, RCEA adopted the Humboldt County Comprehensive Action Plan for Energy (CAPE), which is one of RCEA’s primary guiding documents.  The CAPE established specific strategic action items relevant to the development of the region’s offshore wind energy resources, including:

Finalized in 2014, the RePower Humboldt Strategic Plan (a community-wide effort to define a vision and Strategic Plan for achieving energy independence and energy security in Humboldt County) identifies “pursuing opportunities for off-shore wind energy research, development, and demonstration” as an important objective, noting that Humboldt County is uniquely positioned to play a critical role in the early adoption of offshore wind energy resources in California and that local harbor infrastructure can support development of these technologies.

Turbine photos on this page courtesy of Principle Power Inc.

Sign up for our Listserv to get the latest news and announcements.

When you visit the website, our server may create cookies, which are small files placed on your computer, making it easier for you to use the website by verifying when you travel from page to page. The data we collect on website usage from cookies is not tied to your personal information and we only use it in a collective form. We do not sell or transfer the data we obtain from cookies for any purpose other than to evaluate website usage or provide utility services to you, or to contact you to offer programs and/or services that you may be interested in. We only use cookies that are necessary.